New Delhi, May 6: The juggernaut of the Indian Premier League (IPL) 2019 has finally entered its business end as the play-offs stage is set to kick off. After witnessing high-quality cricket and numerous nail-biting clashes going across 44 days and in 56 games, we finally have top-four teams who'd fight for the coveted trophy.

Mumbai leapfrogged Delhi Capitals and defending champions Chennai Super Kings to finish the league stage at the top after drubbing Kolkata Knight Riders by 9 wickets at their home ground.

Mumbai's emphatic win over Kolkata ended the Dinesh Karthik-led team's campaign in the tournament and denied them a play-off berth and helped Sunrisers to qualify into the play-offs despite having just 12 points in the table. SRH became the first team in the history of the tournament to finish in the top four with 12 points. 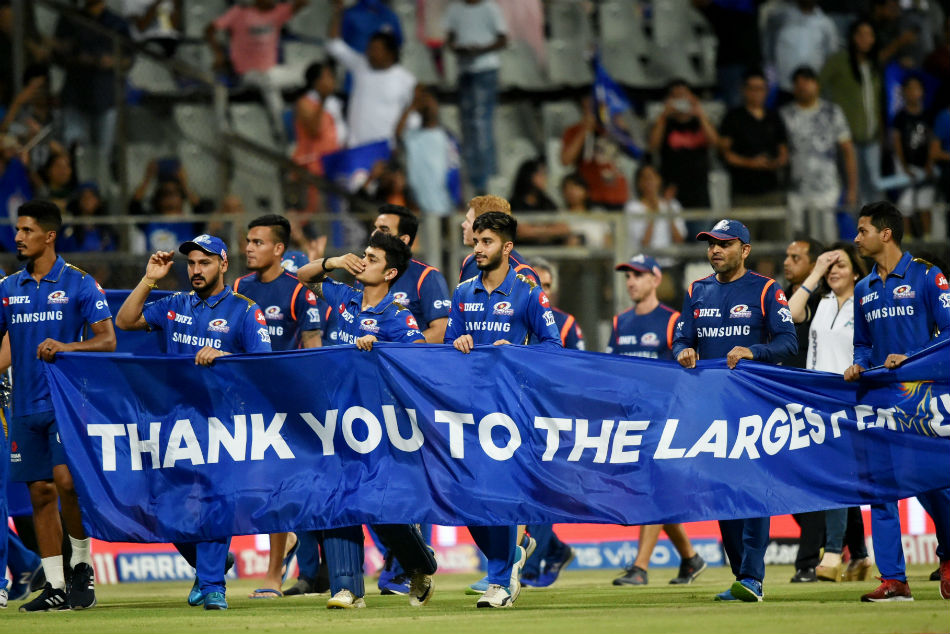 The Orange Army were tied with KKR and Kings XI Punjab with 12 points from 14 games but the Kane Williamson-led side had a better run rate. While the top-three teams had 18 points each but three-time champions Mumbai ended up with the best run rate followed by CSK and DC.

Finishing amongst the top-two means Mumbai Indians and Chennai Super Kings will have an extra chance of making it to the play-offs even after losing the Qualifier 1.

Delhi, who finished third in the points table, will lock horns with Hyderabad in the Eliminator to eventually face the losing team of the Qualifier 1 in the second Qualifier of the tournament.

Here's how these teams entered the top four:

IPL once again proved why it is one of the most exciting domestic T20 tournaments in the world as it went till the very last game of the league stage to determine the top-four teams. Sunday (May 5) was the final day of the league stage and results of both the matches had their impact on the top half of the points table.

MI defeated KKR by 9 wickets to finish at the top while CSK's defeat at the hands of Kings XI Punjab prevented the defending champions from claiming the top-spot in the table. Of the 14 games they played, Mumbai, Chennai and Delhi won nine of them and lost five while Hyderabad secured six wins and eight defeats in the season.

Rohit Sharma-led his team from the front in their final league game at their home ground and finished on a high. MI are often hailed as late bloomers because they gain pace as the tournament progresses but it wasn't the case with them this year. After losing their opening game to Delhi, Mumbai returned to winning ways and won 6 of their first 9 games. The three-time IPL champions didn't have a good season last year and they looked determined to make a statement this time.

MI would take the confidence from the fact that they are undefeated by CSK - whom they will face in the Qualifier 1 on May 7 in Chennai - in this season and are the only team to have beaten CSK in their den.

MS Dhoni-led side enjoyed brilliant run in this season too but the Yellow Army's recent form hasn't been very good. In their last 5 games, CSK - who were the first team to qualify in the play-offs - have won two and lost three.

They were outshined by Kings XI Punjab in their last game. Batting first, CSK failed to post a par total on a flat Mohali track which assists the chasing side. Some quality bowling the death overs from Punjab restricted CSK from finishing with a flourish and later KL Rahul's explosive knock in the powerplay took the game away from the visitors' grip.

CSK, who are the only team in the tournament to have qualified for the play-offs every single season they have played, would be wary of their poor record against Mumbai. Dhoni and his boys have dominated the teams at Chepauk and would be hoping to replicate their success when they take on MI in the Qualifier 1.

CSK started the new season from where they left last year as Dhoni-led side won 7 of it's first 9 games. Dhoni's absence due to injury cost his team in the second-half of the league stage but the three-time champions ensured they still manage to finish amongst top-two.

2019 was a dream season for the Shreyas Iyer-led side as they made it to the playoffs for the first time since 2010. Delhi Daredevils rechristened themselves as Delhi Capitals at the start of this season and one can say that the change of name has also resulted in a change of fate for the Delhi-based franchise.

The best part about Delhi Capitals in this season has been that they have performed as a team and several match winners throughout the season. Coach Ricky Ponting and mentor Sourav Ganguly's boys won 5 of their first 9 games and played consistently. Though DC lost matches at home but their performance in away games ensured the boys in light Blue were always in playoffs contention.

However, just before the play-offs stages, the team suffered a massive blow as their key bowler Kagiso Rabada suffered an injury and has been ruled out of the tournament.

They will be facing Sunrisers Hyderabad in the Eliminator at Vizag on May 8. Delhi would be still be backing themselves against a depleted Sunrisers as they've nothing to lose.

Sunrisers Hyderabad would call themselves very lucky as they became the fourth team to qualify into the playoffs despite having just 14 points. The Orange Army started the season with a bang riding on the batting exploits of David Warner and Jonny Bairstow as they won five of their first 9 games. The team looked too dependent on their openers who looked simply unstoppable and shielded the lacklustre middle order.

But the departure of these two players cost the last year's runner ups badly. SRH lost four of their last five games but Warner-Bairstow's aggressive batting from the early stages of the tournament ensured they enjoyed a good run rate, which eventually paid off at the very end of the league stage.

However, Manish Pandey's return to the form after Bairstow's departure was heartening to his team and Kane Williamson - who was the leading run-scorer last season - too seems to have found his rhythm. SRH have gotten a genuine chance of giving themselves another shot at winning the tournament and put up a collective team effort in the last week of the tournament.

This side still has quality match winners in its ranks and they would be raring to go all guns blazing now and ensure they play the final on May 12 at their home ground.