Rishabh Pant for World Cup: Why are we rushing things?

Bengaluru, May 10: Ever since he has hit that scintillating 159 not out against Australia in a Test match in Sydney earlier this year, wicket-keeper-batsman Rishabh Pant has only made more friends.

Even the terrible mess-up with the gloves in the home series against Australia in March proved to be an aberration as fans continue to say that the 21-year-cricketer is the best player India did not pick in the squad for ICC Cricket World Cup 2019.

The ongoing Indian Premier League (IPL) has seen Pant delivering -- though not too consistently -- but whenever he is hitting the runs, the clamour is returning right back. 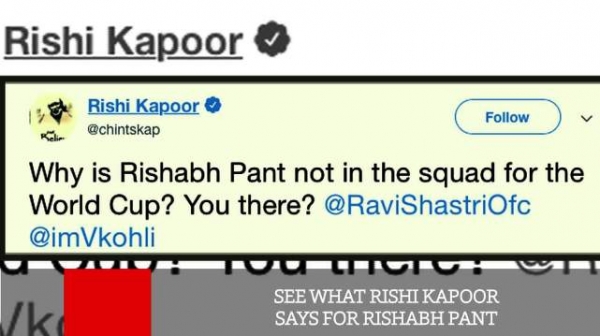 Apart from those who analyse and follow the game regularly, even the ever-opinionated filmstar Rishi Kapoor has not stopped short of asking why there is no place for Pant in India's World Cup squad.

Why is Rishabh Pant not in the squad for the World Cup? You there? @RaviShastriOfc @imVkohli

Pant started off this IPL season with a 27-ball 78 not out and on Wednesday (May 8), he made a blistering 49 off 21 in the eliminator against Sunrisers Hyderabad that changed the game and tilted it in the favour of its side Delhi Capitals.

Played less than a month ahead of India's first game in the upcoming World Cup, the innings has refuelled the cry to include Pant in the squad. The deadline for making changes in the World Cup squad is May 23 and Pant has been kept as one of the standby players who can chip in if any of the regular 15 members is unable to play.

Pant's performance in the IPL this season has been less shiny than the last (he scored 684 off 14 last season with one hundred and five fifties while the tally this season is 450 from 15 games with three half-centuries) but since he has already been an international star now, the support for his inclusion in the World Cup squad is more intense.

Pant will automatically be first choice

One would feel that things are being rushed too far in case of Pant. The explosive batsman has age on his side to play in World Cups in the future.

Once the veterans Mahendra Singh Dhoni (37) and Dinesh Karthik (33) move away from the scene, it will be all Pant. So there is no urgent need to pushing him hard. The man's batting ability is undoubtable, but he needs to improve his glovework so that he can be of double impact for India, just like Dhoni, the man he admires.