By Sajith B Warrier
Updated: Friday, April 27, 2018, 17:22 [IST]
oi-Sajith B
Andres Iniesta celebrates one of his goals with Lionel Messi.

Bengaluru, April 27: Barcelona captain Andres Iniesta is set to leave the club at the end of the season amidst reports that he is eyeing a move to Chinese Super League (CSL) where he is linked to Chongqing Dangdai club.

Iniesta, who scored in Barcelona's recent 5-0 win over Sevilla in the Copa del Rey final, has spent all of his senior career with the Catalan giants and is their most decorated player ever along with Messi, having lifted 34 trophies.

It could soon be 35 if Barca clinch the Liga title on Sunday (April 29) at Deportivo La Coruna. 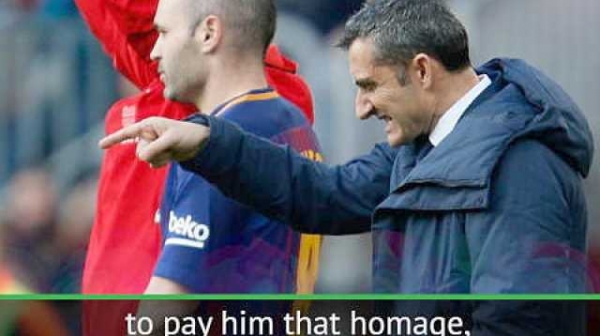 Iniesta was substituted in the Copa del Rey final in a match in which he got standing ovation from the crowd, and though coach Ernesto Valverde denied that it was nothing like a farewell, the grapevine was strong that it was linked to the CSL move.

The midfielder is one of the most loved footballers in Spain after he scored the only goal in the 2010 World Cup final when they beat the Netherlands to lift the trophy for the first time.

He is also remembered for his touching tribute to his friend, the late Espanyol player Dani Jarque, after scoring the winning goal, ripping off his shirt to reveal a t-shirt saying "Dani Jarque, always with us."

He also won the European Championship in 2008 and 2012 and is routinely given a standing ovation at every ground he plays for Barca. He even gets a positive reception when playing at hated rivals Real Madrid.

Born in the village of Fuentealbilla in Albacete province, Iniesta moved to Barcelona's youth academy in 1996, aged 12.

He later described the day he joined the academy as the worst moment of his life, due to the pain he felt at being apart from his family.

The sacrifice, however, paid off as he became one of the club's best ever players.

Iniesta has made 669 appearances in all competitions for the club since making his debut aged 18 in a Champions League game at Club Bruges in October, 2002 when Louis van Gaal was Barcelona coach.

The 33-year-old first said he could leave Barca after their 3-0 win over Chelsea in the Champions League on March 14, telling reporters he had to decide whether to accept an offer from China by the end of April.

He will be part of the Spain team at the 2018 World Cup in Russia, after which he is set to retire from international football.

The only trophy that escaped Iniesta's grasp was the Ballon d'Or award, given to the best player in the world each season.