Manchester, April 22: Pep Guardiola believes Patrick Vieira has the capability to step in as Arsene Wenger's successor at Arsenal.

Vieira captained Arsenal during their golden period under Wenger at the start of this century, with his powerhouse midfield performances at the heart of their celebrated 2003-04 'Invincibles'.

The former France international went on to stints at Juventus and Inter before finishing his playing career at City. 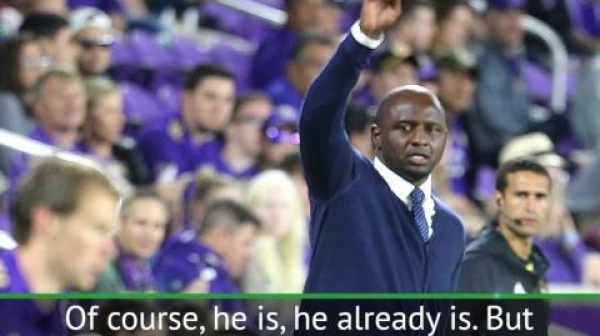 Vieira a top manager and ready to manage Arsenal - Guardiola

He has stayed on the Etihad Stadium payroll, first as Elite Development Squad manager and now as head coach of New York City, who operate under the City Football Group umbrella.

The 41-year-old has been namechecked among a host of candidates to step into Wenger's shoes after the long-serving Gunners boss announced he would step down at the end of the season on Friday.

And Guardiola feels he has seen enough during his two years at City to suggest Vieira is up to the challenge.

"Of course, he already is," the former Barcelona and Bayern Munich coach replied when asked whether Vieira can become a "top manager".

"Now, with what happened [Wenger's announcement] there is a lot of names there.

"Arsenal is going to take the best decision for them. But, of course, he is ready.

Thank you for everything pic.twitter.com/FT5rDt5Hzt

"I spent nine years at Arsenal, which makes the club really special for me," he said.

"But that is not enough to coach the team.

"I am always flattered to hear my name linked with different football clubs. That is good for your ego but at the same time, I am happy here.

"We will see what will happen in the next couple of years."

Speaking a day before he called time on his 22-year reign, Wenger was more of Guardiola's opinion.

"He's a guy who has the potential one day, yes," he told reporters on Thursday.

"I've followed his managerial career. I think he does very well but overall, this Premier League is special.

"You have to come in and there are plenty of former players who played here who have potential, the intelligence and knowledge to do it."