Ever since the draw had been announced, all eyes were on Panghal's bout with Dusmatov, a two-time gold medallist at the Asian Championships and a world silver medallist. The Rohtak boxer was making his continental competitive debut in the 52kg this time, but the result remained the same. 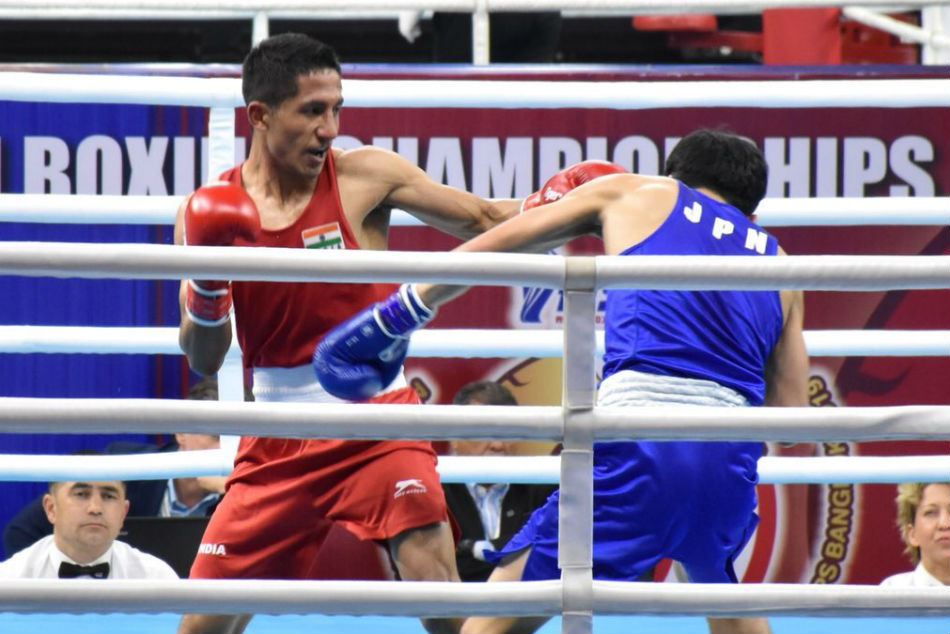 In the fourth career meeting between the two, the Strandja Cup gold medallist made it two in a row over Dusmatov with a deadly 4-1 blow to lay his hands on his second medal from this competition after a bronze in 2017. It was incidentally Dusmatov who had halted Amit's run two years ago.

‘It has been a strategic win against #HasanboyDusmatov and I thank my coaches for the win today.”

Hear 👂 what was @Boxerpanghal’s game plan ahead of the bout exclusively from the champ himself. #PunchMeinHainDum #boxing pic.twitter.com/iNH20Q8dTY

"All the strategies that I made with the coaches came to good use today. I am very happy and this motivates me further to take the gold. I'll keep making the right strategies for my next bouts as well and will return home with nothing less than a gold," said an elated Amit after the win.

Kavinder Singh Bisht (56kg) was the star of the show for India in the morning session on the first day of quarter-final action. Carrying his scintillating form from the GeeBeeBoxing tournament in Finland where he landed a gold, the Uttarakhand pugilist dug deep to see off 2017 world champion Kairat Yeraliyev of Kazakhstan 3-2 in a hard-fought contest.

The fast-rising Sonia Chahal of Haryana, aged only 21, showed a lot of maturity and calm nerves in her enthralling 3-2 win over Korea's Jo Son Hwa. This was Chahal's second consecutive victory over Hwa after getting the better of her in the World Championships semi-finals last year.

After a silver medal from the World Championships at home in 2018, the Haryana girl is now aiming for a gold at this tournament.

Makran Cup gold medallist and national champion Deepak (49kg) did not even have to enter the ring as he was given a walkover by Afghanistan's Ramish Rahmani due to injury. The semi-final berth awarded Deepak his first Asian Championships medal.

2018 World Championships bronze medallist Lovlina Borgohain (69kg), however, succumbed to a 0-5 defeat to reigning world champion Chen Nien-Chin after losing to the Chinese Taipei boxer in the semi-finals of the world event last year. Seema Poonia (81kg) too departed from the competition following a 0-5 knockout delivered by her mighty opponent, the three-time world champion Xiaoli Yang of China.

Also bowing out was Rohit Tokas (64kg), whose journey was ended by Mongolia's Chinzorig Baatarsukh in a tough 3-2 split decision.

On Tuesday, Shiva Thapa (60kg), a three-time Asian Championships medallist, will look to add further to his cabinet when he plays the quarters. Ashish Kumar (75kg), Ashish (69kg) and Satish Kumar (+91kg) too will continue their medal quest.

On the women's side, veteran Sarita Devi (60kg) will be eyeing a staggering sixth Asian Championships medal while former world junior champion Nikhat Zareen (51kg) is another of India's strongest medal bets at this elite tournament.