Marseille, April 27: Florian Thauvin and Clinton N'Jie were on target as Marseille won 2-0 in the first leg of their Europa League semi-final against Red Bull Salzburg. 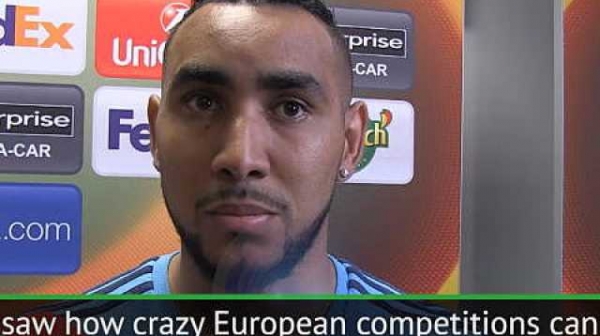 Payet wary of Salzburg after 'crazy' European comebacks this season

Rudi Garcia's men had the better of Thursday's tie at Stade Velodrome but were fortunate on two occasions when decisions from referee William Collum went in their favour.

Thauvin converted a cross from the influential Dimitri Payet by inadvertently heading the ball onto his arm, but with no VAR in use in European football the goal was allowed to stand.

Salzburg had a strong penalty appeal rejected when Maxime Lopez appeared to bring down Stefan Lainer in the box, but Collum said no and Marseille doubled their lead in the 63rd minute.

Captain Payet was again at the heart of it, collecting a pass from substitute N'Jie, progressing down the left flank and laying a superbly weighted pass back into the winger's path for a precise finish.

Although Marseille will take a considerable advantage to Austria for next week's second leg after Fredrik Gulbrandsen was denied an away goal by the woodwork, Marco Rose's side lost the first leg of their quarter-final 4-2 away to Lazio but progressed thanks to a 4-1 home victory.

Thauvin has been directly involved in 34 goals this season (12 assists) 🔥#UEL pic.twitter.com/817jn704kO

Payet sent an early free-kick off target but Marseille took the lead in the 15th minute, although the goal was a controversial one.

Another Payet set-piece was floated to the back post and Thauvin arrived unmarked, heading the ball in off his arm to give his team-mate a fifth assist in the competition.

Duje Caleta-Car should have done better with a header from Andreas Ulmer's corner, before Yohann Pele - deputising for injured Marseille number one Steve Mandanda - saved easily from Lainer in the 29th minute.

Salzburg demanded a penalty when Lopez collided with raiding right-back Lainer in the area early in the second half, but referee Collum waved away the claims.

Pele had to make a great save to deny Hannes Wolf, but N'Jie replaced Lopez and scored within three minutes of his introduction.

N'Jie dropped deep to link up with Payet, who carried the ball down the left and slotted the ball back into his colleague's path for a neat strike past the helpless Alexander Walke.

2015 - Dimitri Payet is the 1st OM player to deliver 2 assists in a single Europa League game since Abdel Barrada against Slovan Liberec in December 2015. Gifts. pic.twitter.com/J7eYIjtGuD

Valon Berisha tried to muster a rapid response but his drive was beaten away by Pele, with Diadie Samassekou and Munas Dabbur then missing the target.

Gulbrandsen went close to earning Salzburg what would have been a vital reply with 13 minutes to go, but the substitute saw his shot cannon back off the woodwork to leave Salzburg facing another daunting second-leg turnaround.