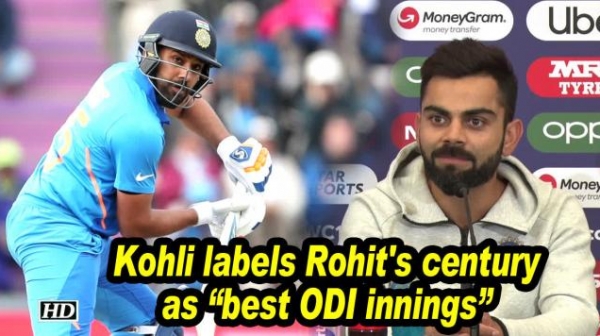 Bengaluru, June 7: The ICC Cricket World Cup 2019 is more than a week old and not much about the forecast 'who has a broader bat' has come to be true.

The run feast in the England-Pakistan ODI series ahead of the big event had given rise to the expectation that the bowlers will be non-entities in this edition as teams will be breaching 500-run marks with ease and those targets might even get chased as well! The popular perception was that England will be the first team to cross 500-run total in ODIs.

They have not done too badly with their batting in the first two games that they have played, but have not succeeded in replicating their recent performance against Pakistan in the World Cup clash either.

In 10 games that have been completed in this World Cup so far, only three matches and five innings have seen 300-plus scores and none of them have been chased down. While South Africa had the worst defeat while chasing 300-plus target against England and lost by 104 runs, they came close to Bangladesh's 330 and England fell only 14 runs short of Pakistan's 348. On Thursday, the West Indies came close to overhauling Australia's 288 but fell short by 15 runs.

In fact, the maximum successful run chase in this World Cup so far is 244 which New Zealand did against Bangladesh. On the other hand, scores like 105 (Pakistan vs WI), 136 (Sri Lanka vs NZ) and 207 (Afghanistan vs Australia) show that the batsmen have not had their best of times in this tournament batting first either. Even a generally carefree hitter like Rohit Sharma was made to adjust his game (122 not out in 144 balls) to see India overcome the South African challenge in Nottingham on Wednesday.

It is quite surprising to see the 2019 ICC Cricket World Cup is being played like the traditional way, even in this age of slam-bang T20 cricket. There is a clear confusion in perception as pitches are being blamed and the organsiers are accused of favouring certain teams. The thing is that the bowlers are making an emphatic statement in this tournament and making it an even battle which is good for the game.

To conclude, we must appreciate India captain Virat Kohli's observation that in the World Cup, even traditional scores like 26-270 will not be easy to make because of the humongous pressure that comes with the high-profile tournament. So far, Kohli has been spot on.