British GP: Quartararo bounces back after crash to dominate Day 1 at Silverstone

Bengaluru, August 28: Fabio Quartararo (Monster Energy Yamaha MotoGP) shot out the blocks at Silverstone, the 2021 FIM MotoGP World Championship leader ending Day 1 of the British Grand Prix over half a second clear despite an FP2 crash.

Jack Miller (Ducati Lenovo Team) was second quickest, with Jorge Martin (Pramac Racing) also bouncing back, in his case from an FP1 tumble, to take third on first contact with Silverstone on MotoGP machinery. 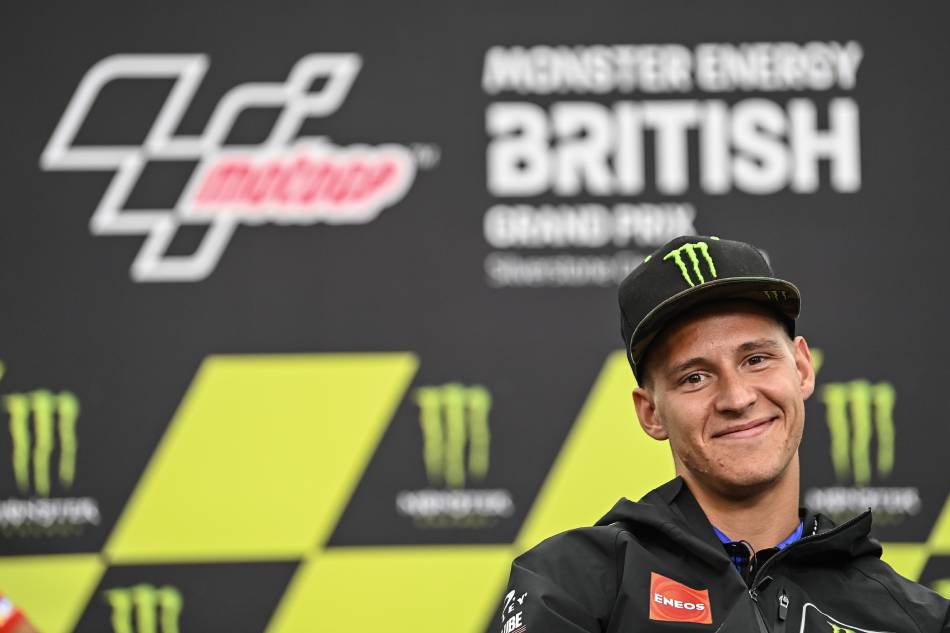 Marc Marquez (Repsol Honda Team) stole all the headlines in the morning. The six-time MotoGP world champion was the fastest, and the only rider under the two-minute barrier, but he also brought out the Red Flag for a fast crash through Maggots and Becketts.

0.250sec behind Marc Marquez was Aleix Espargaro (Aprilia Racing Team Gresini) as the Spaniard slotted into second, pipping Quartararo by 0.110.

Pol Espargaro (Repsol Honda Team), who had a grandstand seat for team-mate Marquez' slide in the closing stages, took fourth by just 0.035, with Miller closing out the top five within less than a tenth.

After Marquez' huge 170mph crash at Turn 2 in FP1, it was Quartararo who suffered a vicious off in FP2. The Frenchman highsided at the Vale chicane, a crash that caused Quartararo to hobble away after his left foot took a beating.

If anyone was worrying about El Diablo's condition, they weren't a few minutes later when Quartararo went back out and set the fastest lap of the weekend.

After crashing at Turn 12 in FP1, Alex Marquez (LCR Honda Castrol) crashed in a similar fashion to Marc Marquez in FP2 at Turn 2.

Debutant and home hero Jake Dixon (Petronas Yamaha SRT) improved his time by 1.3s in the afternoon, the British rider making good progress to set a 2:02.601, just over a second shy of Alex Marquez.

FP2 timesheets are the combined timesheets as everyone improved, leaving Quartararo dominant after Day 1 ahead of Miller, Martin, Pol Espargaro and Marc Marquez.

Miller, on his Ducati, laid down some speed, though Quartararo, despite the crash was a whopping 0.512 in hand over the Australian rider.

Miller and Martin reeled in Quartararo again, but neither could get within half a second. But Martin, the Pramac rider impressed on a circuit which is unknown to many.

Title hopefuls Joan Mir (Team Suzuki Ecstar) and Johann Zarco (Pramac Racing) find themselves outside the top 10 after the first 90 minutes of running at Silverstone, a big Saturday morning FP3 awaits in the battle for the automatic Q2 places.